Neno Dimov, the man who took over as the president of the EU’s Environment Council on Jan. 1, got an earful yesterday when he appeared before members of the European Parliament. Some of his past words were coming back to haunt him.

Lawmakers were aghast that a man who once called climate change a fraud and described himself as an opponent of climate science was going to be coordinating the EU’s environment policy for the next six months. “You personally have been questioning climate change and whether human activity is the cause; you even challenged the theory of sea-level rise,” Dutch Liberal MEP Gerben-Jan Gerbrandy said to him. Other MEPs demanded he clarify his personal stance.

Dimov demurred. He would not say anything about his personal opinion on climate change, noting only that there is a “political consensus” within the EU on climate change and that he will “keep this consensus alive.” However, he said, there is always room for “challenges and doubts.” A vocal admirer of U.S. President Donald Trump, Dimov has in the past said global warming is being used as a tool of intimidation.

So how did the EU end up with a climate-skeptic environment chief? The European Union, always keen to avoid the impression of being centralized around Brussels, has a variety of traditions meant to diffuse power throughout the bloc.

One of these is the “rotating presidency.” Every six months, one of the EU’s 28 member countries takes charge of the Council of the EU – the bloc’s upper chamber, made up of ministers from each of the national governments. Each of the Council’s policy configurations – for instance, the Agriculture Council, made up of the 28 different agriculture ministers – is chaired by the presidency country.

As Bulgaria’s environment minister, Dimov will chair the Environment Council until the end of July. This means he will set the agenda and conduct negotiations with the European Parliament on behalf of all the member states. The Council does not propose legislation – that task falls to the Commission, the EU’s executive branch, and its environment commissioner, Karmenu Vella. But Dimov will still have the power to steer important pieces of legislation over the coming months. 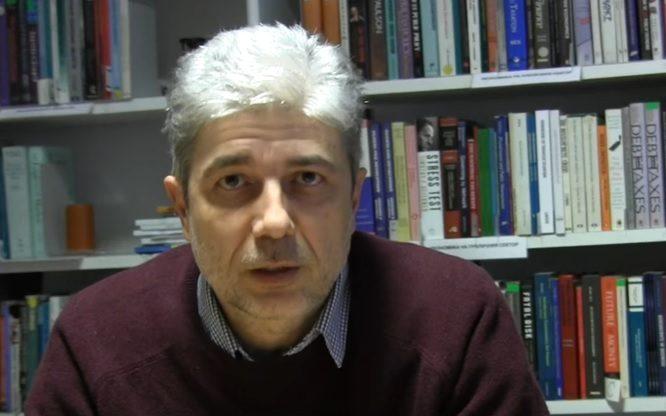 Dimov became Bulgaria’s environment minister in May of last year, and shortly afterward he gave a TV interview saying that “climate change is a scientific debatе; there is no consensus, and every part has arguments.” He said that he is one of the opponents. In 2015 he said in an online video that global warming is a “fraud … used to scare the people.” “The melting of the ice will not raise the sea level even with a millimeter,” he said. “The main factor for climate change is solar activity.”

But it is Dimov’s stance on sustainability and preservation issues that have riled environmentalists in his home country. He is currently embroiled in controversy over his decision to open up protected nature areas in the country to development, including for a large new ski resort. Earlier this week, Bulgarian environmentalists gathered in front of the Council of the EU to give a jar of fresh air from one of the nature reserves to Dimov as he arrived in Brussels for his meetings.

“There are big protests in a lot of cities in Bulgaria and abroad because of the National Park Pirin, and we want Neno Dimov’s resignation as a main wish of the protests,” says Danita Zarichinova of Friends of the Earth Bulgaria. “He’s made total chaos in the ministry on the politics of air pollution, plastics, Natura 2000 zones and so on.”

Dimov is no stranger to environmental issues. He has built his career portraying himself as a fair-handed and reasonable arbiter, striking a balance between environmental protection and economic development. “We must have some symbiosis between these two trends, if we want to improve the standard of our living as they both determine the quality of life,” he told Bulgaria’s Focus Radio this month. “This is actually what I was trying to achieve from the very beginning.”

Dimov served as Bulgaria’s deputy minister of the environment from 1997 to 2002, during which time he was also a member of the management board for the EU’s European Environment Agency – somewhat analogous to the Environmental Protection Agency in the United States.

Afterward, he conducted Bulgaria’s EU accession negotiations in the field of environment. He has written a book critical of environmental red tape, called “From Environmentalism to Freedom.” Dimov will not be the traditional president of the Environment Council, where previous minister-presidents have tended to come from either purely political or environmentalist backgrounds.

In this way, he may find common cause with a counterpart across the Atlantic. Scott Pruitt, the new head of the U.S. EPA, has a similar background of crusading against environmental red tape and casting doubt on climate change.